A downloadable game for Windows

MECH ENCOUNTER: RISE OF THE BLADE

Mech Encounter is an action mech combat simulation inspired by Mechwarrior 2 and other classic games of the era.

The Synthonic Blade have invaded corporate space, led by their AI 'princess', they decimate planets and leave only strange towers in their wake.

Your mission: Get to the mechbay, select your weapons carefully, and engage the enemy. 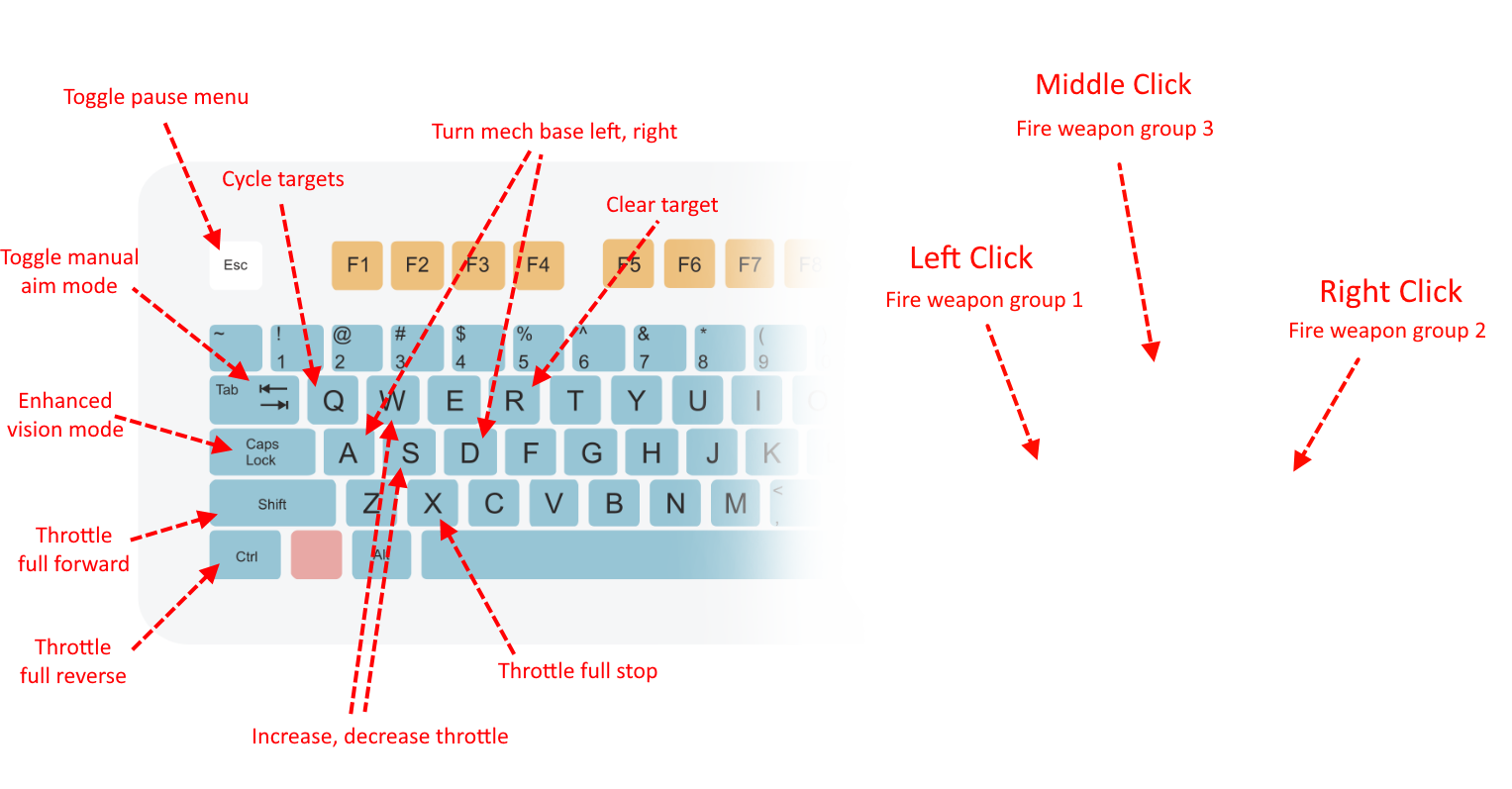 HOW TO PLAY MECH ENCOUNTER:

When you open Mech Encounter, the first thing you'll see is the Mechbay. Once you've customized your loadout, you will proceed into the battlefield. Destroy structures, kill hostile mechs, and secure the area.

Customize your mech in the mechbay by selecting weapons to occupy hardpoints.

When you add weapons to your mech, your weight increases. Increasing your weight lowers your maximum possible speed. The maximum weight you can have on your mech is 75 tons.

Only weapons attached to the ARM can gimbal, otherwise the weapon is 'fixed'. If a weapon is fixed, it can only fire directly forward, and can not automatically aim at targets.

Press the ready button in the bottom right when you have finished customizing your loadout. 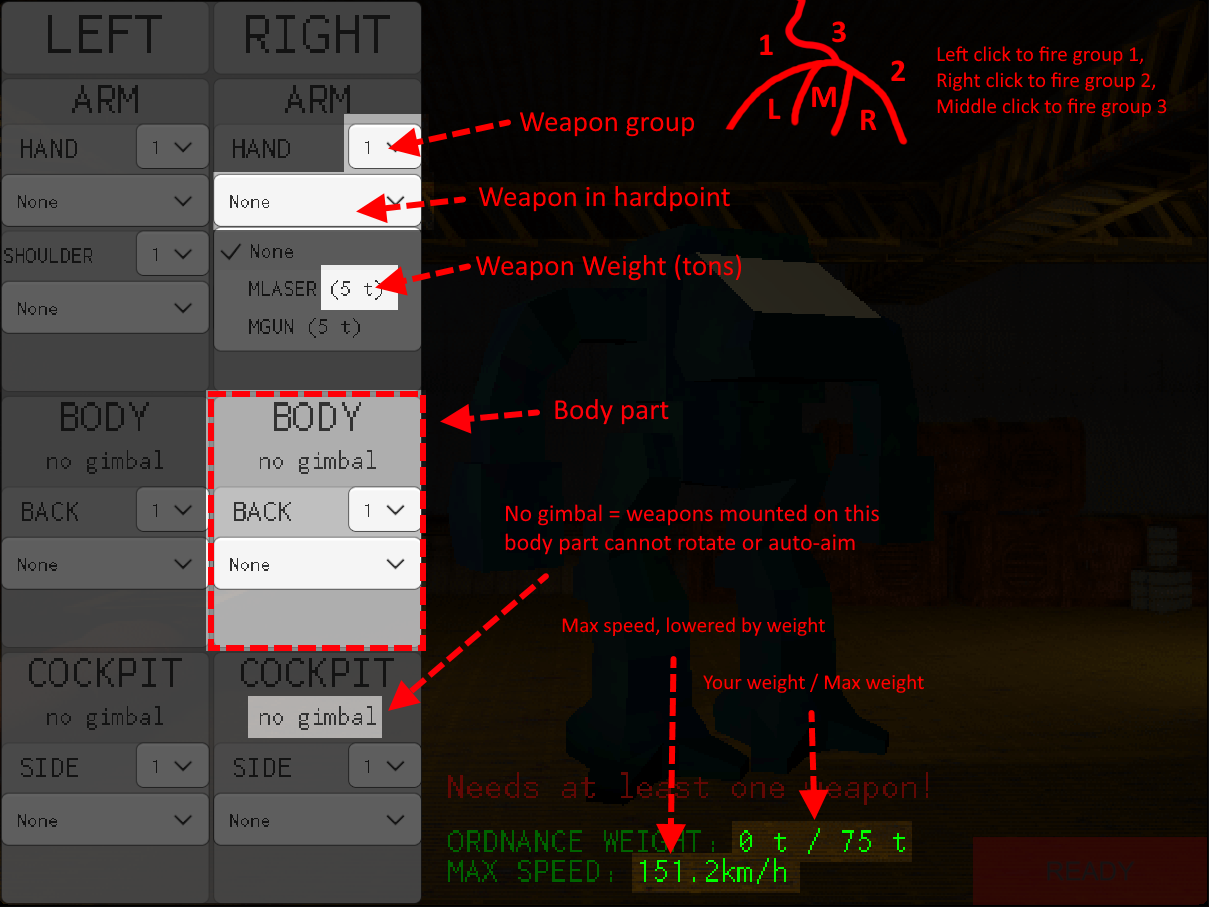 Move the mouse to rotate your mech's torso. You can only rotate 90 degrees in each direction from the way the mech's base is facing.

To rotate the mech's base, press A or D. Note that your torso will rotate along with the base.

To move your mech, increase the throttle by holding W. Your current throttle can be seen at the bottom of the screen.

Top left of your screen contains a minimap that displays the terrain and possible targets.

Underneath the minimap is an objective display that displays your current objective.
The two bars at the top of the screen indicate your current torso twist.

On the right of your screen is a list of weapons mounted on your mech. It contains the name, ammunition or current heat, weapon damage, weapon cooldown, weapon group, and "G" or "F" to denote 'gimbal' or 'fixed'.

The wireframe mech on the bottom right of the screen represents your current health and status. Each element will change color based on it's current damage.

At the bottom of the screen, throttle and current speed are indicated.

In the bottom middle of the screen is a green arrow indicating your current velocity, and if locked on to a target, a red arrow will appear indicating the direction to the target.

In the bottom left of the screen, if you are currently locked on to a target, you will see a wireframe version of the target showing damage on each element of the target.

There are blue objective markers that indicate the direction of your objective. 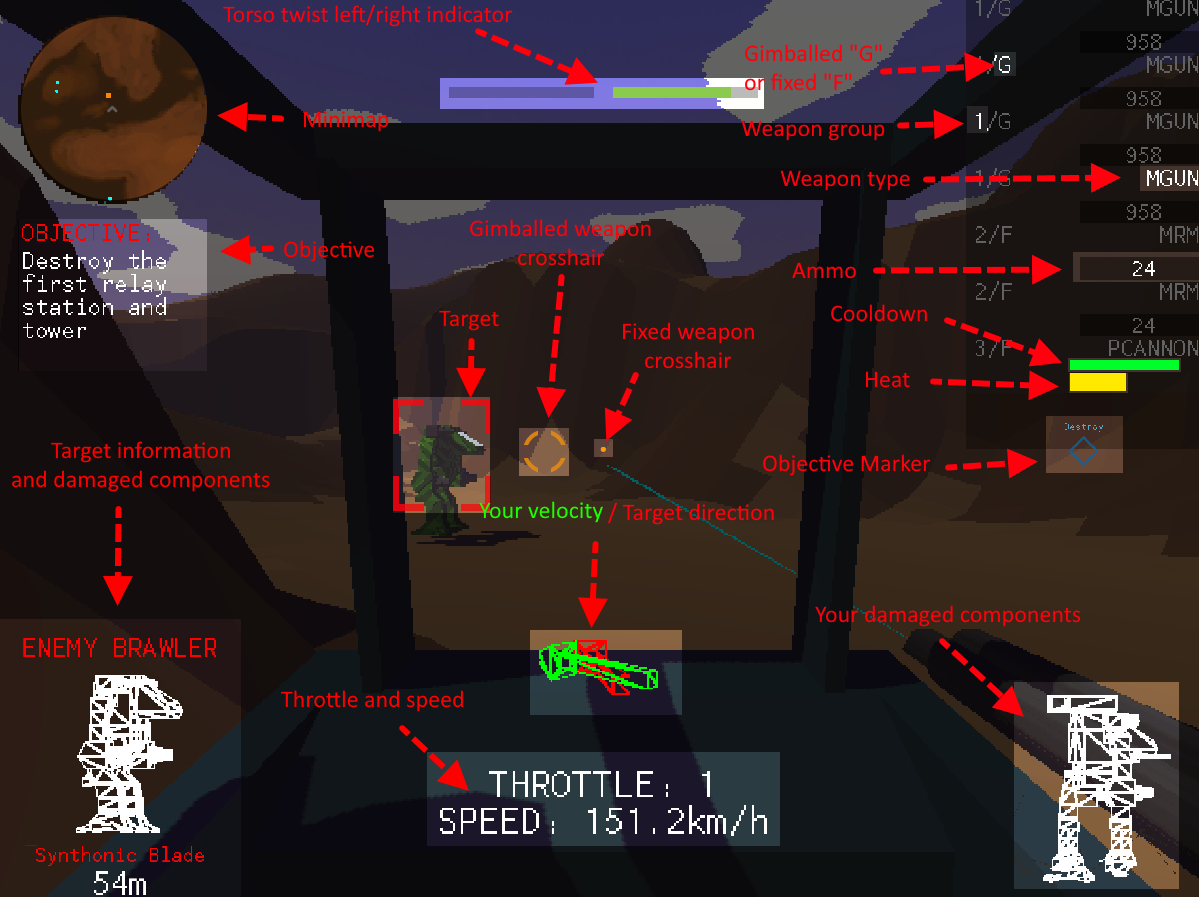 Press tab to toggle manual aim mode, allowing you to manually aim gimballed weapons. While in this mode, gimballed weapons will not track your target. Aim for enemy limbs or weapons to gain an advantage.

Energy based weapons can overheat if fired too often. Watch the yellow 'heat bar' next to your weapons in the top right. If overheated too often, your weapons will self-destruct.

Extract the .zip archive to a folder of your choice. Run the .exe to start the game. Consult controls.txt or controls.png for control information.

Longtime fan of the 1989 Mechwarrior game here, and have been itching to recreate it for years.  It looks like you did it!  Thank you!

Any chance of a MacOS build?

Ooooo! Mech2 vibes! I need to try this.

If you like mech sim games maybe check out my game navpoint alpha. It's inspired by the satellite view from mech2 and also has damage zones.

This was freaking cool!!! Takes me right back, thank you very much for making it <3

Excellently done. It was lots of fun to blow mechs up. It felt fair and like I couldn't just ignore the enemies.

was playing this tonight, felt solid & really fun to play! hope u expand on this in the future :)